Minneapolis Minnesota is home to a lot of things. Prince lived there, they have 10,000 lakes, and there is probably some other shit that I am failing to remember off the top of my head. Well the land of 10,000 lakes is also home to Rhymesayers Entertainment and Eyedea and Abilities. You probably are familiar with them if you know who Atmosphere, Brother Ali, or P.O.S are.

Eyedea is probably best known as a battle emcee. The emcee made a quick name for himself by winning two of hiphop’s best known competitions, the 1999 Scribble Jam emcee battle, and the HBO sponsored Blaze Battles. With 3 albums released from 2001-2004, Eyedea stayed busy in the early parts of the new millennium and five years after the release of “E&A”, Eyedea and Abilities returned with the release of their latest record “By The Throat”. Which hit shelves as of July 21st, 2009 on Rhymesayers Entertainment. 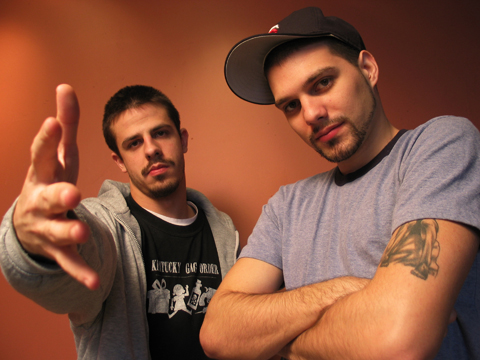 During that five year hiatus, the duo had a chance to reflect on personal issues and work on various side projects. Eyedea started a freestyle/jazz group known as “Face Candy” which has seen one release so far, titled “This is Where We Were” and his alternative rock band “Carbon Carousel”. Many fans were concerned that Eyedea & Abilities had departed and gone off in separate directions. However, this was not true. The duo announced that they would be playing at the Twin Cities Celebration in August of 2007, performing both new material as well as old.

“I don’t remember, I always have names for things floating around. I just thought of that image, you know? Of something grabbing you by the throat. The feeling of suffocating and being choked. It gave a good overall uh, I think it’s a good indicator of how the records gonna sound.” Said Eyedea “It isn’t as much about spiritual freedom as much as it is about sitting in that spot about to go crazy and everything collapsing in on you. And that is what the cover art is supposed to represent, sitting in an apartment and instead of sunshine coming through, it’s bombs, and guns and the world just attacking you” stated the emcee about the albums title.

The album is grown up for sure, this isn’t a battle record, it’s nothing like past Eyedea & Abilities records. It’s got metaphors and things to make you think throughout the entire album. The album, which features a lot of alternative rock influence isn’t a attempt to go against the grain and stand away from the typical hip-hop albums.

“It’s a more personal album all the way through, I try and take the personal stuff and make it general. Only a few people, maybe even one know where the stuff came from that is on this album.” said the emcee in regards to the records subject matter. “I try to take the personal stuff and look at it in a bigger way, ya know? I don’t want to be like this is my pain and suffering. I think it’s all of ours to share.”

Surely some fans may not like the route the artists have chosen to take, but with time comes change and every person goes through change. You can’t exactly pinpoint what type of album “By The Throat” is though. You can either like it, love it or hate it.

“Over the last five years I’ve been writing rock songs, and it changed the way that I wrote rap songs for sure.” Eyedea said. “The production, I wanted to play a lot of guitar. This is the first Eyedea and Abilities record where we fully gave ourselves to it. We knew didn’t have to be battle rappers or this or that. You have to be real, that’s the only rule. You have to make sure that what you’re talking about is something that you fully connect with” claimed the emcee about the new album sound and feel.

What most people don’t know is that Eyedea and Abilities started off very young. Their first album which was titled “First Born” was made when the emcee was between the ages of 16 and 17, second album, “The Many Faces of Oliver Hart” was done at 18 years old and “E&A” was finished before the emcee could even legally by a drink at the bar.

“This record definitely did alienate people who were fans of our other stuff. But in my opinion, First Born did that as well.” Said Eyedea. “I like the fact that this album isn’t just elevator music. It’ like you do like it or hate it, you should fucking hate it. I’m glad you have an opinion about it. I’m glad it’s that big of a deal that you definitely don’t like it.”

As for the old Eyedea, he’s gone. No more clever punch lines aimed at MC’s wanting to come up in the underground hip hop world. No more freestyle battles. That style is in the MC’s past now.

“Yeah it is. And the truth is, it was never really there. I was young and I thought I had to do that to get a name.” explained the MC. “It was kinda fun at the time, I guess. I would never, ever compete in those things again. I have no interest in them and to be completely honest, I wasn’t interested back then. Which is part of the reason I won, because I actually didn’t give a fuck at all about it.”

Even though the rapper is over freestyle battles and competing, the MC does admit that at the time, it was fun. and would actually freestyle again, but not at the same level.

“When those guys like JUICE and Eminem came out and when I was doing it, the scene was ill, like really ill. So I would just listen to those guys and see how they did the punch lines and what not.” Eyedea explained. I’ve never even rapped like that, I don’t rap like that now. I don’t write songs like that. So I guess it was a separate thing. But yes, to answer your question, that part of me is gone.”

The emcee still admits that what will always stay strong inside him is his love for improvising. The side project “Face Candy” is all improvised. As well as a slew of other projects.

As far as new E&A material goes, don’t expect anything anytime soon. Basically tours and shows for now. However, the artist did put out a solo record recently, under the name “Michael Larsen” which is the rappers birth name.

With four E&A records under their belts. As well as numerous side projects, this surely won’t be the last time you’ll hear Eyedea on a record. You just may not recognize him on his other projects right away.

For more information on Eyedea and Abilities, and to find out where they or one of the side projects might be playing at near you, you can follow them on Twitter or check Rhymesayers.

Eyedea and Abilities also just got announced to Sound Set Music Festival on May 30th, 2010 at Canterbury Park in Shakopee, MN. (rain or shine) along with Eyedea & Abilities will be headliners Atmosphere, Bother Ali, Method Man & Redman, Freeway & Jake One, Murs, Cage, Hieroglyphics and many more.

More From This Artist